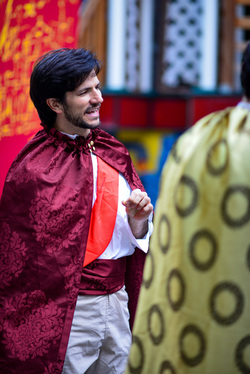 People are talking about us!

Click here to check out our write up in the NYPost!
Read our features for The Taming of the Shew:
http://www.brooklynpaper.com/stories/37/28/24-taming-of-the-shrew-1950s-2014-07-11-bk_37_28.html
http://www.sheckysnightlife.com/articles/dirt-cheap-day-dates-nyc-edition/
http://brooklynbased.com/blog/2014/07/17/two-places-to-see-free-shakespeare-in-the-park-without-the-wait/

Read our profile in the Brooklyn Daily Eagle by clicking here!

For: The Taming of the Shrew
"...Although the sun was hot and glaring at the beginning of the performance, it eventually sunk below the skyline and left a golden veil over the performers.Before the show began, Jennifer Sandella, the co-founder and artistic director of Random Access Theatre, spoke about the company’s passion for implementing current social issues into the works that they produce. “The Taming of the Shrew” no doubt ascribed to this idea.

Following a plot about marriage, the story examines gender roles and subordination in women, and has often been criticized for being sexist. However, the Random Access Theatre performance brings new ideas to the traditional story. A combination of female actors playing normally male-casted characters, as well as a significant undertone of satirical humor (something Shakespeare may have meant to be noticed as well), made the show relatable to women’s issues around the world today.

Ironically, even though the story itself presents a “taming” attitude toward women, the female actors gave the most memorable performances. Diona Burnett, a New York Conservatory School for Film and Television graduate who played a combination of the three minor characters Biondello, Curtis and Tailor, added sharp humor and catchy accents to the play. Jessica Mosher of the American Academy of Dramatic Arts, who added perhaps the biggest change to the original play with her portrayal of Tranio (usually played by a male), brought the play to life and put a fantastic spin on the story. Overall, the cast kept the large audience’s attention, as well as catching that of several passers-by, throughout the play’s entirety."
-Kathryn Cardin, Brooklyn Daily Eagle
Read the full review here:
http://www.brooklyneagle.com/node/12176%20

"...It was an absolutely delightful production.  Each and every actor delivered a well versed, captivating performance. I heard every word, quite a feat in the out-door environment, especially with some loud party cruises sailing by! Props and costumes were minimal, just enough to tell the story. The focus here was the language and the characters.

If you are familiar with the play, you know it doesn’t translate particularly well to modern interpretations. The plot revolves around wifely obedience and the place of women in society. This production was set in the 1950’s and especially emphasized the anti-feminist aspect of the play. There was absolutely no romance. The ending left me feeling particularly uncomfortable, not uplifted as comedies traditionally do. This was clearly the director’s intent."
-Mary Lane, New York Cliché
Read the full review here:
http://newyorkcliche.com/2014/07/22/shakespeare-in-brooklyn-bridge-park/


For: Anthem
"Random Access Theatre's adaptation of Ayn Rand's dystopian novella is powerful, intense and polished... There is so much to appreciate in the show’s brief 70-minute running time. The performances are all-around solid and there’s a true sense of the ensemble from start to finish. Tom Carman is particularly commanding. In such a verbose work he is a master storyteller, judiciously exploiting the power of his voice. Daniel Burns, Amanda Donelan, Laura King and Rachel Riendeau provide equally pointed, unswerving work.

Anthem is swiftly paced by director/adapter Jennifer Sandella, who enhances the evening with vivid stage pictures (the detention sequence, the council berating a man who spoke an unspeakable word) and a clever use of space. Sarah Abigail Hoke-Brady not only has one of the most fabulous names to discover in a program but her lighting design is inventive-- at times severe, other times remarkably subtle. And one of the most lucrative aspects is David Andreana’s sound composition and design. The music is thrilling and dangerous as 7-2521 maneuvers around the stage with a flashlight, then perfectly romantic when he meets 5-3000 in a forest, birds chirping and all."
-Brett Epstein, Theatre is Easy
read the full review here:
http://www.theasy.com/Reviews/2013/A/anthem.php

For: Tempting Air
"Fractured and quick, this work reframes Shakespeare's classic by featuring recognizable characters in new contexts with a scrambled timeline. Iambic pentameter weaves with southern belle accents and monster voices... the actors move elegantly on stage, through heavy green and red lighting, gesturing majestically and miming in unison. Shakespeare's enduring words play in an intriguing, abstracted presentation performed by a company that knows how to speak poetry in voice and body."
-Jonas Griffin, NOLA DEFENDER


For: Rope
"Random Access Theatre keeps the dinner party — thrown by rich kids Brandon and Granillo (Nate Grams, Martin Meccouri), after murdering a Harvard classmate — moving at a clip by beginning each act with the last lines of the previous one. Director Christopher Shepard adds a few stylish innovations of his own, such as setting key moments in semi-darkness and adding the sound of the electric chair whenever the two light a cigarette. Patrick Hamilton's 1929 drawing-room melodrama is a surprisingly candid depiction of homosexuality... co-dependent as their relationship is, the twosome commits murder not because of sex but because they do not know the difference between right and wrong."
-Patricia Contino, Flavorpill New York

"The overall production of Rope found creative and beautiful ways to work with the budgetary constraints of independent theater. Christopher Shepard’s direction was sharp and choreographic, with moments of amazingly tense sexual tension between the leads. Andrew Chandler and Abby Hoke-Brady teamed up to make an excellent, expressionistic look for the stage that brought us into the world darkness and murder."
- New York Innovative Theater Awards Judge

"The cast is an overall talented bunch. I must make a special mention of Martin Meccouri as Granillo, who brought levels of pent up emotion, frustration, and an element of helplessness that was moving. Generally, a very strong production from a talented theater company."
- New York Innovative Theater Awards Judge